This book has practical tips on almost every page. It’s excellent and deserves detailed study. Here are notes I took from the book.

Writing is not easy. It’s hard, lonely, and words seldom seem to flow.

Rewriting is essential. Professional writers rewrite their sentences over and over.

Writing is a craft, not an art, and the man who runs away from his craft because he lacks inspiration is fooling himself.

Writers approach writing differently. Some write by day and others by night. Some in silence and others with music. All of them are vulnerable and all of them are tense. They are driven by a compulsion to put some part of themselves on paper.

The self who emerges on paper is far stiffer than the person who sat down to write (whoa). The goal is to find the real man or woman behind the tension (See Ira Glass perspective on craft).

Good writing has an aliveness that keeps the reader reading from one paragraph to the next. Most of these principles can be learned.

Clutter is the disease of American writing. Unnecessary words, jargon, and pompous words.

Need evidence of this? Did you understand the last terms of use update you checked off online? How about bank terms of service when you open an account? How about understanding health insurance bills?

The secret to good writing is to strip every sentence to its cleanest components. There are many fillers that weaken the strength of a sentence. They usually occur in proportion to education and rank.

How do we achieve freedom from clutter? Clear your head from clutter. Clear thinking becomes clear writing.

A muddy thinker might get away with writing a paragraph or two but the reader will soon be lost. The reader might not come back.

The reader is someone with an attention span of 30 seconds and is assailed by many forces competing for his attention (TV, DVDs, notifications, obligations, email, YouTube, etc…)

Don’t blame the reader if they cannot follow. It’s the writer that hasn’t been careful enough to show clear thought.

A sentence could be cluttered by jargon. It could be poorly constructed where the reader could understand it in several ways. Faced with hard sentences, a reader blames himself at first. They won’t do that for too long. The writer is making them work too hard, and they will look for one who is better at the craft.

Good writing doesn’t come naturally, though most people seem to think it does. Writing is hard work and a clear sentence is no accident.

When feeling frustrated, here’s what an edited page from this book looked like. 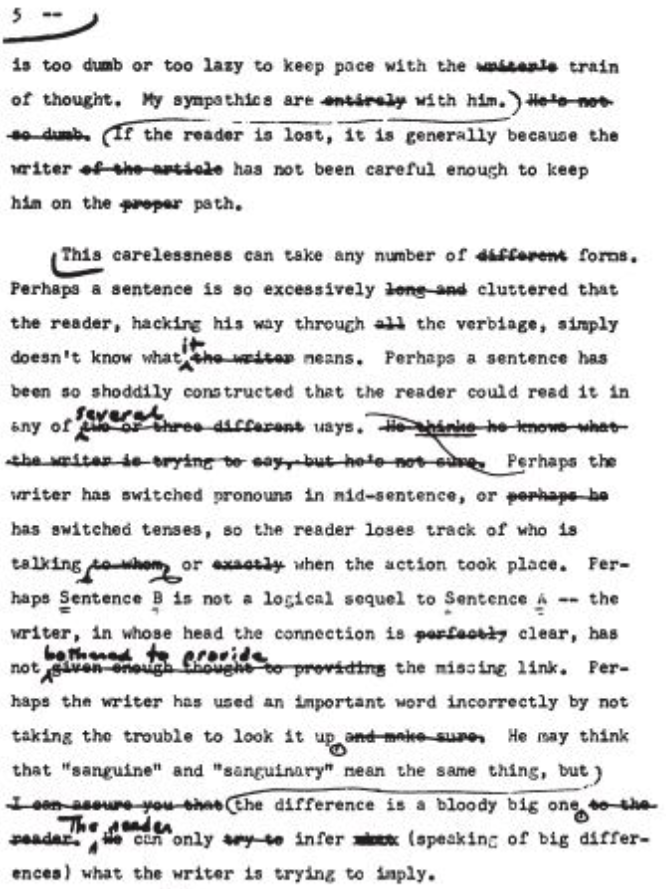 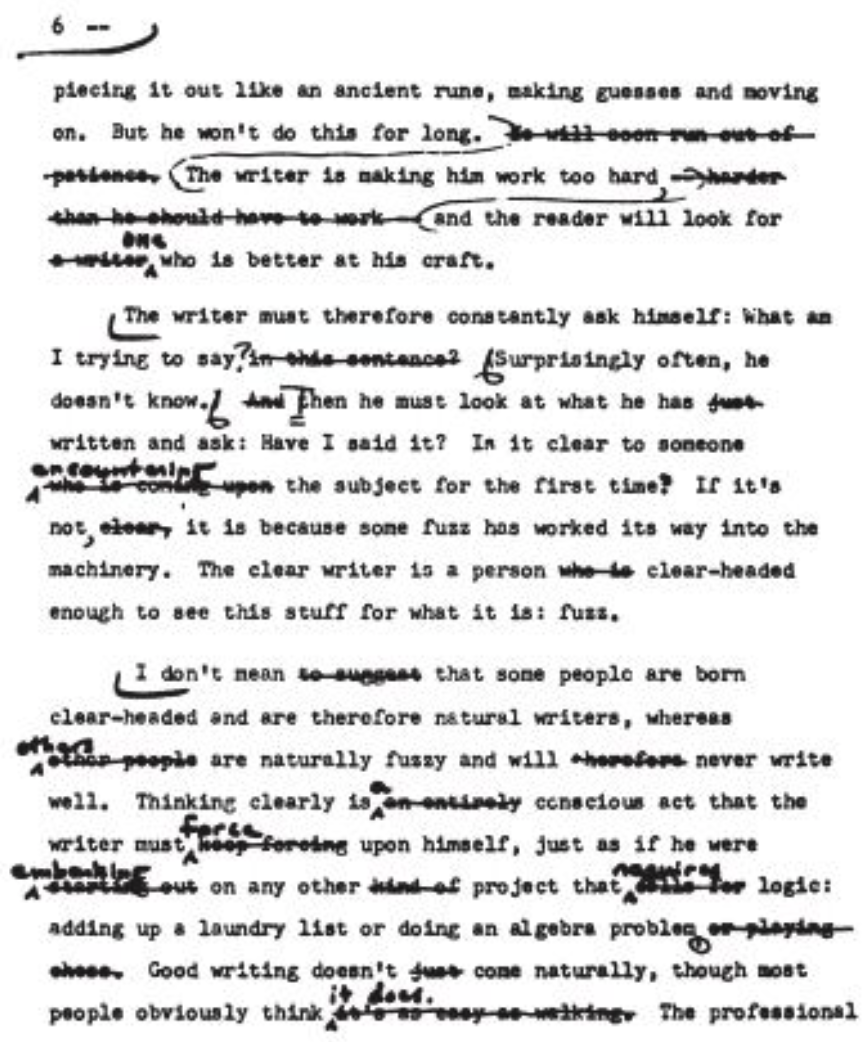 This came from a final manuscript of the first edition. This was not the first draft. Seeing many scribbles and marked out words during a revision is normal.

Fighting clutter is like fighting weeds – the writer is always slightly behind. Consider ‘At this point in time’ vs ‘now’.

Consider the word ‘personal’. A ‘personal friend of mine’ or ‘his personal feelings’. It’s a useless word that should be trimmed in this context. Someone’s feeling is that person’s personal feeling - that’s what ‘his’ means.

“At the present time, we are experiencing precipitation” vs “it is raining”.

“Experiencing” is worse. A doctor will ask “are you experiencing any pain?”. If it was his own kid, he would ask “Does it hurt?”. “Experiencing” is abstracted away from hurt. George Carlin goes into this in his Euphemisms sketch.

Clutter is used by major corporations to hide their mistakes. When an air force missile crashed, it ‘impacted with the ground prematurely’. When a power plant shut down, there was a ‘volume-related production-schedule adjustment’.

A country calls an invasion a ‘reinforced protective reaction strike’. George Orwell pointed out in “Politics and the English Language” that clutter is not just a nuisance but a deadly tool. ‘Civilian casualties’ become ‘collateral damage’.

Politicians will use obfuscated language in order to appear learned. It’s clutter.

Don’t ‘dialog’ with someone you can talk to. Don’t ‘interface’ with anybody.

When editing your first draft, put brackets around words or sentences that could be reduced. Most first drafts can be cut by 50% without losing any information or losing the author’s voice. The reason for brackets is to avoid crossing out words. Brackets suggest shortening the sentence but let you decide on what to do.

Using brackets instead of deleting words gives you an idea of how many clutter words you’re using. As you continue using this technique, you’ll begin to notice clutter words even while you’re writing.

Here is another example [of a sentence] from my [own] writing I [just] applied this technique to.

You might say “If I eliminate everything you think is clutter and strip every sentence to bare bones, will there be anything left of me?” I’ll answer the question on the level of carpentry and then get to the larger issue of who the writer is and how to preserve his identity.

Few people realize how badly they write. No one has shown them how much murkiness crept into their style and it obstructs what they are trying to say.

If you give me an 8 page article and I tell you to cut it to 4, you’ll complain but you’ll get it done. The hard part is cutting it to 3.

The point is that you have to strip your writing down before you can build it back up. Think of it as painting a fence. It was painted before but is in disrepair. You must power wash it first before applying a new coat of paint.

Extending the metaphor to carpentry: it’s first necessary to be able to saw wood neatly and to drive nails. Later you can bevel the edges or add elegant finials.

If the nails are weak, your house will collapse. If your verbs are weak and your syntax rickety, your sentences will fall apart.

First learn to hammer nails. If what you build is sturdy, take satisfaction in plain strength. But you will be impatient to find a ‘style’. To embellish plain words so that readers will recognize you as someone special.

There is no style store. Style is part of the writer. ‘Trying’ to add style is like adding a toupee. By ‘trying’ you lose whatever it is that makes you unique.

Paragraph 1 is a disaster. Paragraph 2 isn’t much better. Paragraph 3 sounds somewhat human. Paragraph 4 is where you sound yourself. Sounds familiar? It’s because by paragraph 4, you have relaxed. You’re not thinking about how to dazzle the reader anymore.

An editor can often throw away the first 3 paragraphs of a script.

As an editor, I’m looking for a sentence “I’ll never forget…”…ah! A person appears!

Writing is an intimate transaction between two people conducted on paper, it will go well to the extent it retains its humanity.

There’s only one you. Nobody else thinks or feels in exactly the same way.

Getting writers to use “I” is not easy. They think they must earn the right to reveal their emotions. Or fear it’s egotistical. Academics use ‘one’. “One finds oneself not in accord…”. I don’t want to meet ‘one’. ‘One’ is a nameless boring guy.

There are vast regions of writing where “I” isn’t allowed. Newspapers, magazines, businesses, and institutions don’t want ‘I’ and they send that profusely into the American home. Colleges don’t want “I” in their term papers or dissertations. English teachers discourage any first-person pronoun except the literary ‘we’.

We have become a society fearful of revealing who we are.

Good writers are visible just beyond their words. If you cannot use “I”, at least write the first draft in first person and then take the “I”s out. It will warm up your impersonal style.

I’ve noticed a new reason for avoiding “I”. Americans are unwilling to go out on a limb. No guts.

Decades ago our leaders told us where they stood and what they believed. Today they perform verbal feats to escape that fate. Watch a politician talk without saying anything. Watch them answer a question without answering a question.

Bush once said this on assault rifles: “There are various groups that think you can ban certain kinds of guns. I’m not in that mode. I’m in the mode of being deeply concerned”. What the hell does that mean?

Leaders who bob and weave like aging boxers don’t inspire confidence. The same thing is true of writers. Sell yourself and your subject will exert its own appeal. Believe in your identity and your own opinions. Writing is an act of ego. Use its energy to keep yourself going.